“Somewhere between Calabria and Corfu the blue really begins... A peninsula nipped off while red hot and allowed to cool into an antarctica of lava…” These are two of the opening lines from Lawrence Durrell’s book “Prospero's Cell”, originally published in 1945. This is the book that made Corfu famous, as it is generally accepted. While these claims could be argued as overblown, indeed the “Girl of the Ionians” could not have found a fitter chronicler.

Seductively balancing descriptive prose with historical detail brings to life the landscape and manners of the island of Corfu. Moreover it did last year an even greater service when the book turned into an ITV series which proved to be a rollicking delight for the English channel, attracting some 6 million viewers and sparking a new wave of British tourists, legions of travelers willing to spend their holidays in Corfu in some kind of pilgrimage to discover whether Durrell’s "little eternities" of the island life still exist after 75 years or so. And they did. And it’s all there. At least most of it: the peacock-wing hued sea, the pastel villages, the rolling olive groves with the massive unpruned trees – instructed by the Venetians to be planted on the island, the grand manor houses and the Tuscan-radiant air – but with far better beaches; the butterfly-filled air of the Pantokrator mountain, Corfu’s highest point, the jaw-dropping views and panoramas from Bella Vista above Paleokastritsa and from the 13th century Angelokastro (“Castle of the Angels”), Byzantine Corfu’s most significant reinforced heritage.

Yes, the enchanted world is still there: the flat yellow rock at Yaliskari beach on which Henry Miller soaked up the sun, the lapis lazuli waters where, arguably the most influential travel writer of the 20th century, Patrick Leigh Fermor dove; The Green and the Beauty. Mots justes from Durrell, as always. That's what it's all about. Even if he offers, as criticized, splinters of the landscape, Edward Lear didn’t. Corfu was to provide him with the nearest he got to a definition of paradise, to which he responded with his whole being, giving his testimony of Corfu’s landscape that could have inspired Impressionism, with an unerring topographical precision. Beauty is the leitmotif found in any diary, chronicle, book, story or article written by poets, painters, princesses, musicians, or artists who spent part of their lives in Corfu. And there were countless of them. Casanova also lived here, and for good reason in 1744 – 45, while Shakespeare’s spirit floats around as per Durrell’s assertions that Corfu been the inspiration for Prospero's island in his last play The Tempest, with the Bard's mythical "Sycorax" being a lax anagram of the island’s ancient name (Corcyra).

While from geographical point of view Corfu is, undoubtedly, not the most western spot on the Greek map, but from cultural point of view it can be seen as the country’s West End. Corfu had never been really part of the Levantine world; having been spared the years of Ottoman rule it was given a greater chance to cultivate and nourish a greater tradition of education and arts that generated timeless schools, such as the First School of Fine Arts, the first Philharmonic Orchestra and the Ionian Academy (the first Greek University).

But every cloud has a silver lining. Since tourism became the first income resource for the greatest part of the local population there comes a dark side of this beauty too: partly impairing in some fifty odd years what had lasted for centuries is the counteract for modernization. The once quiet, pristine waters around the coastline turned to honeypots warranting classy but often city-sized resorts; the north of Corfu, and notably the north-east, is dubbed Kensington-on-Sea after the bluebloods rubbing shoulders there; the lively bar and club culture of the decaying south of the past, boomed as a haven or heaven of the unrestrained, gimcrack tourism and down-market excesses.

Yet, beyond the discernible, welcomed tourism of the island's coastal strips there are still endless places hidden in the hinterland and all over the island that will whisper you tales of beauty; tales to guzzle the cool Greek country life along with Greek coffee. And overjoy too. Because Corfiot villagers still celebrate panigiria (religious festivals), nowadays more than 72 officially recorded throughout the year, with music, wine, stalls and flowers: scarlet roses, bougainvillea, begonias, and whatever sprouts from Corfu’s lush land. 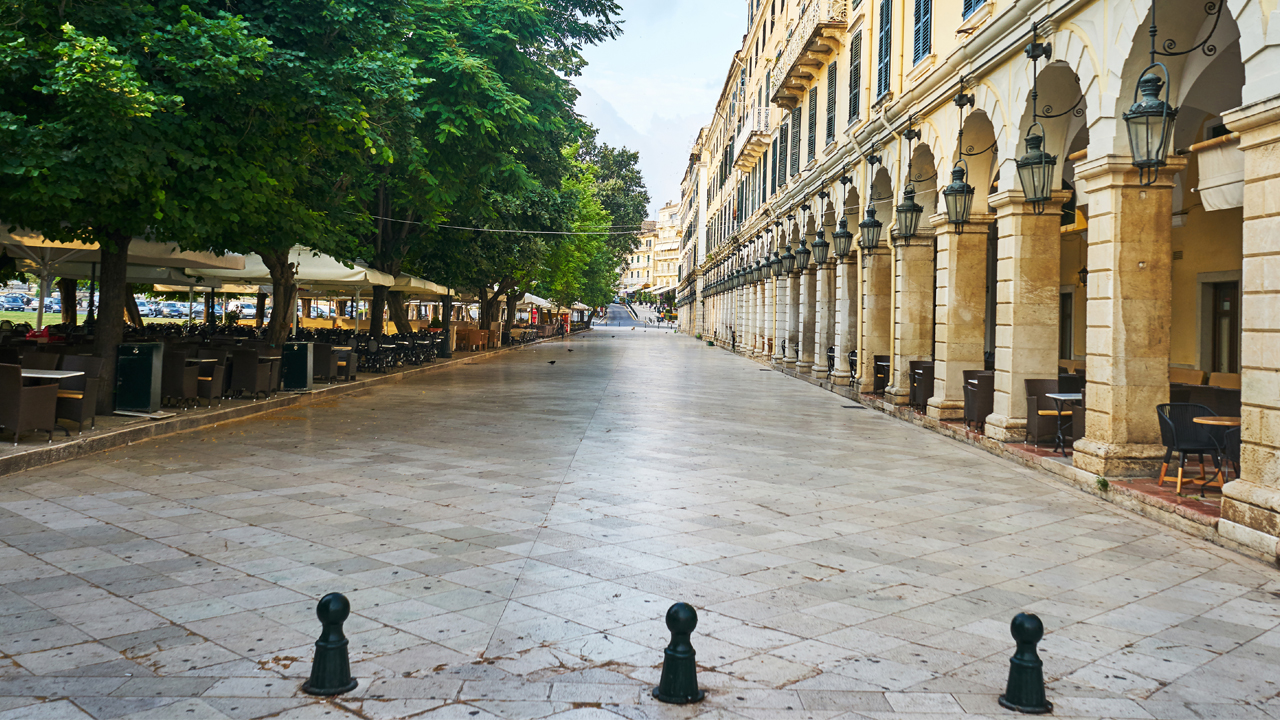 All plants seem to thrive in Corfu. Yet so does construction. Although this is a different, captivating clinker and stones: for History, from architecture to cuisine, has left the island with a fat cultural legacy, the result of Byzantine, Venetian, French and British dominion. Kastropolis (Castle City) is called the capital because of its two castles built by the Venetians. One of the oldest cities in the world, the old town of the city, a UNESCO World Heritage site since 2007, with palaces, fortresses, the red onion dome of the 16th-century Church of Agios Spyridon, the island's miracle-working patron saint, the ascetic public buildings blending along with the stone masonry of the Maltese community, blending with the drying washing lines of the “kantounia”, the so-called tiny cobbled alleyways of Neapolitan recollection, is a unique combination of contrasting design components.

Corfu Town is the island's most nosy reminder of its cosmopolitan past: the Royal Villa of Mon Repos (summer residence successively of British High Commissioners and Greek Kings - Prince Philip, the Duke of Edinburgh, was also born there in 1921) or the Achilleion, predestined perhaps to serve as a casino today, the palace- retreat that Elisabeth – “Sissy” – the Empress of Austria had built in 1890 and dedicated to Achilles, one of her heroes, or the most well-known Corfiot landmark, the Vlacherna monastery and its breathtaking view from the Kanoni peninsula are the most evident, but not the only ones. 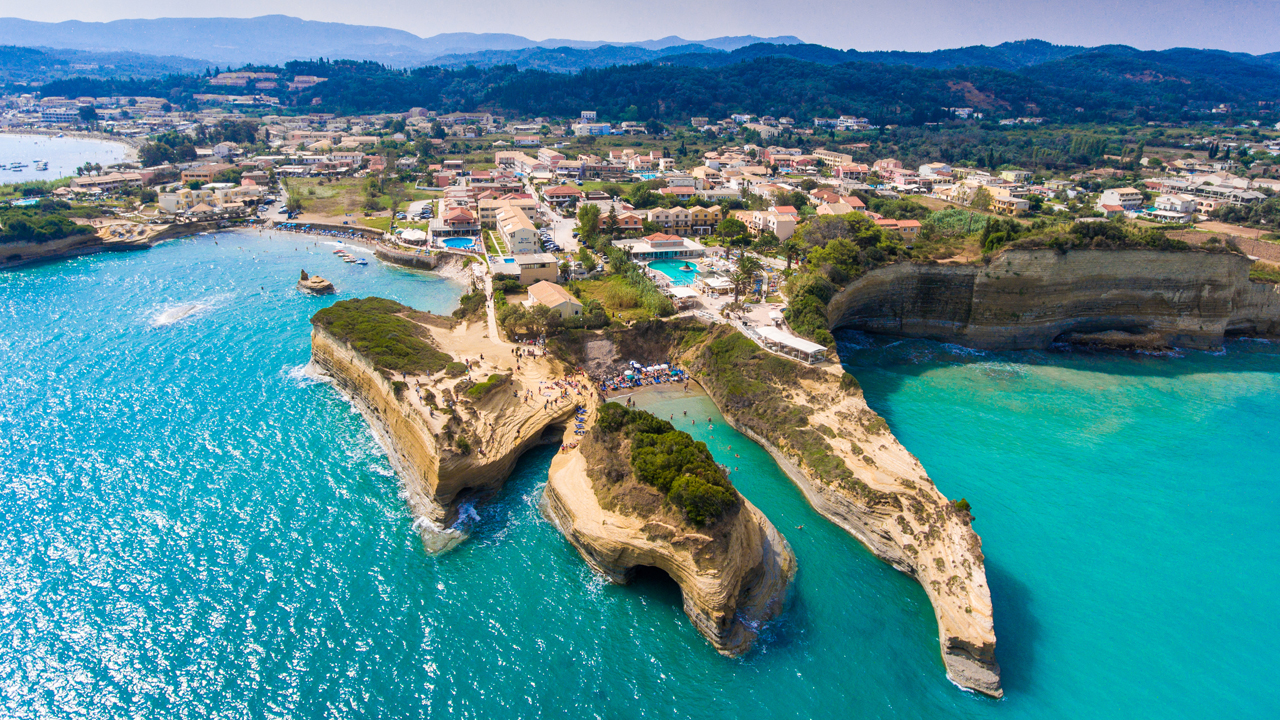 Corfiots playing cricket or drinking an occasional ginger beer on the famous Liston – a true, small-scale copy of the rue de Rivoli in Paris – where traditionally evenings kick off with cocktails, are just a few examples of any lasting cultural hegemonies of the past.

But if Corfu remains an enchanting mixture of sophistication, this has to be searched inside Western Canon’s scripta; suspending disbelief – an impossible task for any modern Indiana Jones to delve into natural objects connected to the Odyssey in the city of Alkinoos – and accepting that Corcyra is identified, as it claims, with the Homeric Scheria, the land of the hospitable Phaecians, along with the arbitrary, but entertaining thought that Odysseus was the first tourist treated, then this story gives a fundamental element of the island’s sense of cultural identity. If so, then what Gerald Durrell once said stands true: “I’d like to think of Corfu as the garden of the gods”. 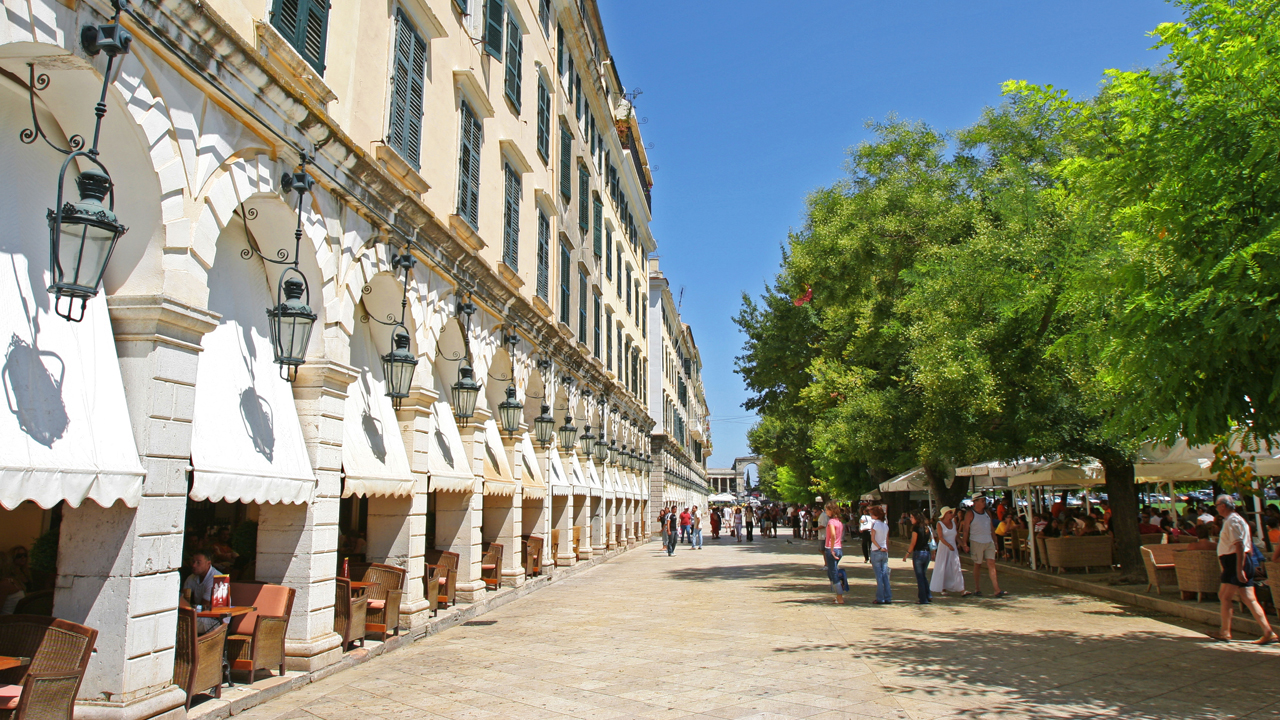 Do you want to learn more about Corfu?
Discover the Capodistrias Museum and enjoy a unique visit to the history of Corfu, Europe and Greece